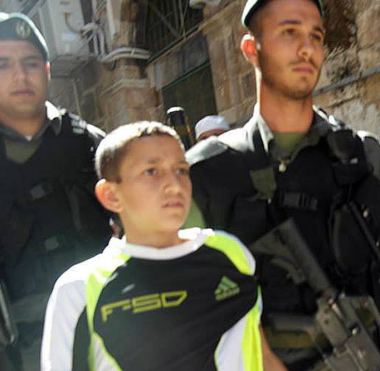 Israeli soldiers abducted, Sunday, a Palestinian who works with the Construction Committee of the Waqf and Endowment Department, in Al-Aqsa Mosque, in occupied Jerusalem, and issued an order barring a child from entering the holy site for two months.

The WAFA Palestinian News agency has reported that the soldiers abducted Raed Zghayyar, from his work in Al-Aqsa mosque, and moved him to a detention and interrogation center.

WAFA added that the Israeli Authorities also decided to prevent Anas al-Metwer, only fifteen years of age, from entering the Al-Aqsa Mosque for two months.

The child was abducted and detained by the police a week ago, after the soldiers stopped him near the Gate of the Tribes.

In related news, the police prevented a Palestinian man, his wife and children, from Umm al-Fahem Arab town, in Haifa District, from entering Al-Aqsa Mosque.

Furthermore, soldiers and officers, deployed at all gates leading to the Al-Aqsa Mosque, are still stopping, searching and examining the ID cards of all Palestinians, who are trying to hold prayers in Al-Aqsa and its courtyards.

In addition, several Israeli military jeeps and bulldozers invaded Palestinian lands in Kharsa area, south of Doura, in the southern West Bank governorate of Hebron, and started bulldozing them to install a military tower.

Also in Hebron, the soldiers invaded the towns of Surif and ath-Thaheriyya, and abducted two Palestinians.

It is worth mentioning that the soldiers have abducted sixteen Palestinians overnight, in Nablus, Jenin, Ramallah, Bethlehem, Hebron, and Jerusalem, in the West Bank.