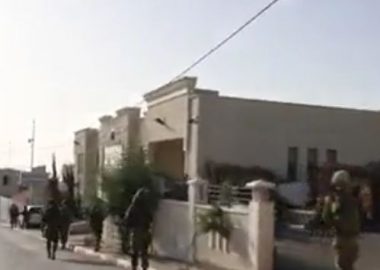 Israeli soldiers invaded, Sunday, the southern West Bank city of Hebron, and several nearby towns, broke into and searched many homes and abducted one Palestinian.

Media sources in Hebron said many soldiers invaded Beit Kahel town, west of the city, before breaking into and violently searching many homes, and abducted a young man, identified as Ahmad Issa Kanaan, 25.

The soldiers also invaded many neighborhoods in Hebron city, in addition to the towns of ath-Thaheriyya and Sa’ir, before closing the Container roadblock, and the Shuhada Street.

Also Sunday, the soldiers confiscated at least three privately-owned Palestinian vehicles in the ar-Ras al-Ahmar area, southeast of Tubas, in the northeastern part of the occupied West Bank.

|Israeli Soldiers Surround A School That Was Previously Demolished In Bethlehem|