Army Abducts A Palestinian Near Ramallah 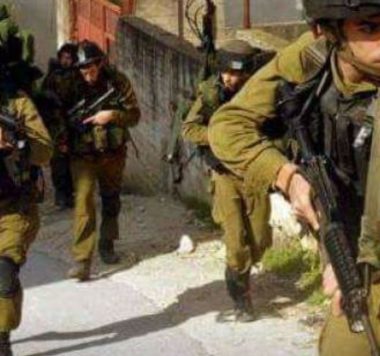 Israeli soldiers abducted, on Thursday evening, a young Palestinian man from a Kafr Dan town, west of the northern West Bank city of Jenin, after stopping him at a military roadblock near Ramallah, in central West Bank.

Media sources said the soldiers abducted Ahmad Mohammad ‘Aabed, from Kafr Dan, after stopping him at a sudden military roadblock near Ramallah.

They added that the soldiers stopped and searched many cars, and investigated the ID cards of scores of Palestinians, before abducting the young man, and took him to a nearby military base.

In related news, the soldiers invaded an area near Teqoua’ town, southeast of Bethlehem, and fired many flares and concussion grenades, after a car of a colonialist settler sustained minor damage when a Palestinian hurled a stone at it.

On Thursday at dawn, the soldiers abducted at least thirteen Palestinians from their homes, in several parts of the occupied West Bank.

Also at dawn, the soldiers invaded Deheishe refugee camp, south of Bethlehem, and caused an infant, identified as Najeh Tha’er al- Me’awi, only 40 days of age, to suffer the severe effects of teargas inhalation, before he was rushed to a hospital in Bethlehem city.