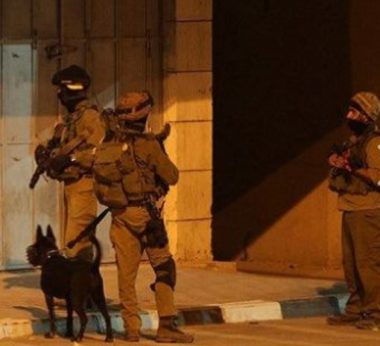 The Hebron office of the Palestinian Prisoners’ Society (PPS) has reported that Israeli soldiers abducted, on Monday at dawn, eight Palestinians, including two children, in several parts of Hebron governorate, in the southern part of the occupied West Bank.

The PPS said the soldiers invaded and ransacked many homes in Hebron city, in addition to several nearby towns, especially Shiokh, Surif and Yatta.

In Surif town, northwest of Hebron, the soldiers abducted a young man, identified as Ahmad al-Hoor.

Another Palestinian, identified as Hussein Abdul-Karim Abu Khousa, was taken prisoner at the al-Jab’a military roadblock, north of Surif.

In Hebron city, the soldiers abducted a child, identified as Abdul-Rahman Faraj Abu Daoud, 15, after the army claimed that he hurled stones at Abu ar-Reesh military roadblock, west of the Ibrahimi Mosque, and moved them to a nearby interrogation facility.

In related news, the soldiers abducted, late on Sunday at night and at dawn Monday, at least 32 Palestinians, including more than twenty political leaders and members of Fateh movement, from their homes in several communities in occupied East Jerusalem.