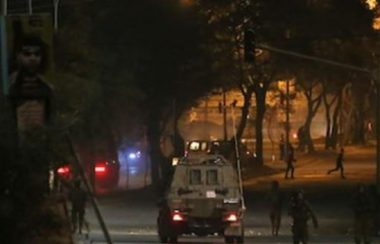 Israeli soldiers abducted, on Monday at dawn, eight Palestinians, and injured four others, during military invasions of Nablus and Jenin, in the northern parts of the occupied West Bank.

They added that the soldiers also invaded many stores along Nazareth Road, north of Jenin, violently searched them and confiscated surveillance recordings.

The soldiers also invaded the Shuhada Junction, in the center of Nablus city, and shot five Palestinian protesters, after firing rubber-coated steel bullets and gas bombs at them.

Medical sources in Nablus said local medics provided the wounded Palestinians with the needed treatment without moving any of them to hospitals or clinics.

During the invasion, the soldiers stormed and searched homes in the Old City of Nablus, and abducted a young man, identified as Ahmad ‘Amira.

In addition, the soldiers the Deheishe refugee camp, south of Bethlehem, and Teqoua’ town, east of the city, abducted two Palestinians and injured one.

In related news, the soldiers abducted six Palestinians, including one woman and three children, in several parts of occupied East Jerusalem, after invading their homes and searching them.