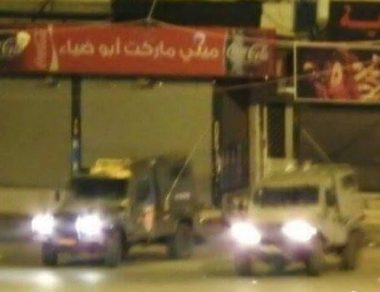 Israeli soldiers invaded, on Monday at dawn, the Deheishe refugee camp, south of Bethlehem, and Teqoua’ town, east of the city, abducted two Palestinians and injured one.

The Bethlehem office of the Palestinian Prisoners’ Society (PPS) said dozens of soldiers invaded Deheishe refugee camp and shot a young man with a gas bomb in his face, after dozens of youngsters protested the invasion and hurled stones at the army vehicles.

The soldiers also invaded and searched homes in the refugee camp, and abducted Ahmad Omar al-Atrash, 19.

The young man was rushed to a local hospital suffering a moderate-but-stable injury.

In related news, the soldiers abducted six Palestinians, including one woman and three children, in several parts of occupied East Jerusalem, after invading their homes and searching them.