Army Abducts Five Palestinians In Bethlehem, One In Nablus 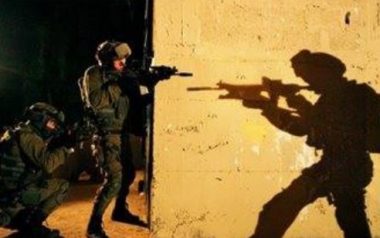 Israeli soldiers abducted, on Tuesday at dawn, five Palestinians from the West Bank governorate of Bethlehem, and one in Nablus, in northern West Bank, after invading and violently searching their homes,

It added that the soldiers also invaded Hindaza area, in Bethlehem city, and abducted Akram Abdul-Hai Sharif, after causing excessive damage to his home while searching it.

Furthermore, the soldiers invaded the home of a political prisoner, identified as of Khalil Shehada Ta’mari, and handed his son, Khaled, an order for interrogation in Etzion military base and security center, north of Bethlehem.

In Nablus, in northern West Bank, the soldiers invaded and searched homes, in the eastern part of the city,fired several concussion grenades, and abducted a young man, identified as Amir Sarkaji, from the Sikka Street.

Also at dawn, the soldiers abducted a female university student from the northern West Bank city of Jenin, and a former political prisoner from Sielet al-Harithiyya town, west of Jenin.

In addition, Israeli navy ships opened fire at several Palestinian fishing boats, while the soldiers fired live rounds at farmers, in the southern and northern parts of the besieged Gaza Strip.