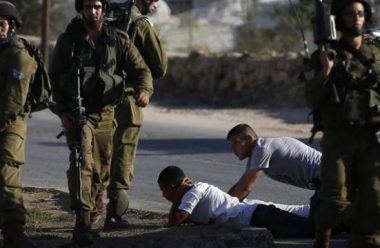 Israeli soldiers invaded, earlier on Monday morning, many Palestinian homes in Jerusalem, and Zawiya village, west of Salfit, in the occupied West Bank, and abducted four Palestinians, including two siblings.

The sources added that the soldiers also abducted another young man, identified as Mahmoud Awadallah Dirbas, from his home in the al-Isawiya town, in the center of Jerusalem.

In addition, dozens of soldiers invaded al-Matar neighborhood, in front of Qalandia refugee camp, north of Jerusalem, and took measurements and photos of several Palestinian homes, which are slated for demolition.

The owners of these homes have previously received demolition orders because their homes “are close to the Annexation Wall,” which was illegally built near them in the first place.

The buildings Israel intends to demolish including around 140 apartments; some already inhabited.

In addition, the soldiers invaded the Zawiya town, west of Salfit, in northeastern West Bank, searched many homes, and abducted Adham Haitham Sobeh, 23, and his brother Ahmad, 20.

On Monday morning, several extremist Israeli colonists opened fire at many Palestinians picking their olive orchards, in Masafer Yatta area, south of Hebron, in the southern part of the occupied West Bank.

In related news, the soldiers and undercover offices invaded,  Monday, the northern West Bank city of Jenin, and Jenin refugee camp, shot and injured a Palestinian driver, and abducted two young men from their homes.