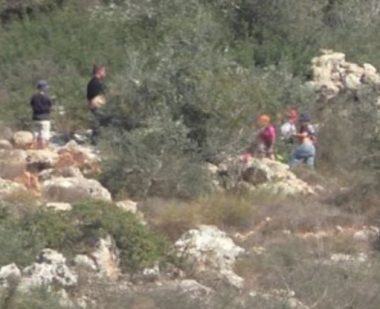 Several extremist Israeli colonists opened fire, on Monday morning, at many Palestinians picking their olive orchards, in Masafer Yatta area, south of Hebron, in the southern part of the occupied West Bank.

Rateb Jabour, a nonviolent activist against Israeli colonies in Hebron, said the colonists came from Ma’on illegal colony, which was installed on private Palestinian lands.

Jabour added that the assailants fired several live rounds at Palestinians picking their olive trees, in their own lands, in the al-Hamra area, near the at-Tiwani Palestinian village, close to the illegal colony.

He also said that, although the Israeli attack did not lead to any physical injuries, it caused anxiety attacks among the Palestinians who feared further violations.

The colonists in Ma’on carry out repeated invasions into nearby Palestinian lands and orchards, in addition to frequent assaults against the residents, including farmers and shepherds, to force them out of their lands.

The attacks witness a serious escalation during the olive harvest season, and include cutting and uprooting trees, in addition to harvesting the them and stealing the produce.

On Sunday, October 29th, a group of extremist Israeli colonists invaded Palestinian olive orchards owned by villagers of Jeet, east of the northern West Bank city of Qalqilia, harvested dozens of trees, stole the produce, and sprayed many trees with toxins.

Earlier the same day, the  colonists invaded  a Palestinian olive orchard, owned by a villager from ‘Awarta, east of Nablus, also in northern West Bank, and harvested many trees before steeling the produce.

On Friday, October 27th, the colonists attacked Palestinian olive pickers in the Masafer Yatta area, to the south of Hebron.

In related news, the soldiers and undercover offices invaded,  Monday, the northern West Bank city of Jenin, and Jenin refugee camp, shot and injured a Palestinian driver, and abducted two young men from their homes.