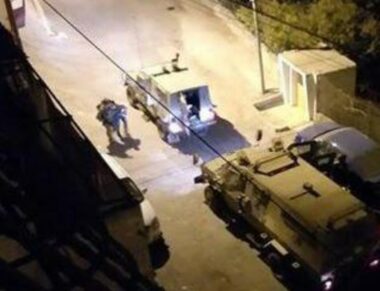 Israeli soldiers abducted, on Monday at dawn, three Palestinians from their homes, near Ramallah, in the central part of the occupied West Bank, and one in Jenin, in the northern part.

The sources added that the soldiers also invaded the al-Am’ari refugee camp, south of Ramallah, and abducted Mahmoud Abu ‘Aita, from his home.

Furthermore, the soldiers invaded Be’er al-Basha village, south of Jenin, before storming and ransacked the family homes of a political prisoner, identified as Yacoub Qadri, and former political prisoner, Sami Mohammad Ghawadra, in addition to the home of Sami’s brother, Marwan.

It is worth mentioning that Yacoub was among the six detainees who managed to escape from the high-security Gilboa prison in September of 2021 before they were recaptured a week later.

The soldiers also invaded the villages of Arranah and al-Jalama, while many military jeeps were extensively deployed in various areas south of Jenin.

Also at dawn, soldiers abducted eight young Palestinian men in Bethlehem city in addition to the towns of Beit Fajjar and al-Khader, south, and west of the city, in the occupied West Bank, after the army broke into and searched several homes.