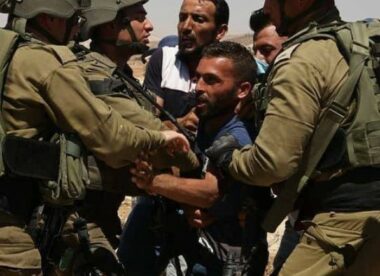 Israeli soldiers abducted, Monday, many Palestinians from several parts of the occupied West Bank after the army stormed and ransacked dozens of homes and buildings.

Confrontations erupted between Palestinians who gathered in solidarity with the critically ill prisoner Nasser Abu Hmeid, and the occupation army.

The soldiers also invaded the al-Jalazoun and the al-Am’ari refugee camps, near the central West Bank city of Ramallah, and abducted a former political prisoner, identified as Awab Ahmad Mubarak, in addition to Ala’ Saleh Abu Sharifa, from al-Jalazoun, and Mahmoud Abu Atiya from al-Am’ari.

A summary of today’s arrests, including those previously reported, are as follows;