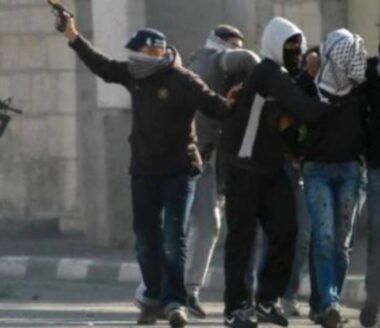 Israeli soldiers abducted, on Wednesday at night and Thursday morning, six Palestinians, including two children and three former political prisoners, in Jerusalem, Bethlehem, and Jenin, in the occupied West Bank.

The Palestinian Prisoners’ Society (PPS) has reported that the soldiers abducted, on Thursday morning, two teenage boys, identified as Ahmad Daoud al-Hadra, 17, and Mahmoud Khalil al-Hadra, 17, after the army stopped and searched a car they were riding in their town of at-Tour, in occupied Jerusalem.

Furthermore, the soldiers installed a sudden military roadblock near Ma’ale Adumim illegal colony, which was built on Palestinian lands owned by residents of Abu Dis town, northeast of Jerusalem, and abducted Ahmad Yahia Ayyad, while the army searched many cars and interrogated the Palestinians while inspecting their ID cards. 1

The army also invaded Abu Dis before breaking into the home of Osama Affana, a member of Fateh Movement’s Organizational Committee in the town, and summoned him for interrogation in Ofer prison, near Ramallah, in central West Bank.

Also, PPS has reported that undercover Israeli soldiers kidnapped Ashraf Abdul-Jabbar al-Hasanat, 47, while walking near the main entrance of the Deheishe refugee camp, south of Bethlehem.

The PPS also said that on Wednesday at night, the undercover soldiers kidnapped a former political prisoner, identified as Anas Ismael Mousa, 22, while walking in the al-Baloa’ area, in the center of the al-Khader city, west of Bethlehem.

On Thursday evening, the soldiers abducted a former political prisoner, identified as Taher Jamal Kamil, a candidate for the Palestinian Legislative Council (PLC), from Qabatia town, south of the northern West Bank city of Jenin, after stopping him at a military roadblock near Ramallah, in central West Bank, but released him later.

During the invasions and searches of homes in Qabatia, the soldiers interrogated many Palestinians while inspecting their ID cards.

In related news, the soldiers abducted, Thursday, six Palestinians from the same family, including a father and his three sons, after the army invaded a residential building in Hebron city, in the southern part of the occupied West Bank.