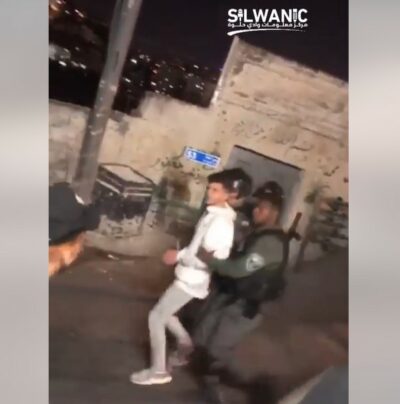 On Monday night, Israeli soldiers abducted three young Palestinian men and injured many others, in occupied Jerusalem, in the West Bank.

The Wadi Hilweh Information Center In Silwan (Silwanic) said the soldiers assaulted three young men, causing fractures in the fingers of one of them.

Silwanic added that the soldiers attacked many Palestinians and their homes with gas bombs, causing dozens, including children, to suffer the effects of tear gas inhalation.

It also said that the soldiers dragged a young man out of his car and repeatedly assaulted him, causing various injuries.

Locals who witnessed the attack tried to help the young man before the army assaulted them and fired gas bombs and concussion grenades.

The army also abducted one Palestinian near Bab as-Sahera in Jerusalem and another young man at the Shu’fat refugee camp, north of Jerusalem.

On Monday dawn, Israeli soldiers abducted thirteen Palestinians from their homes and injured one in several parts of the occupied West Bank.