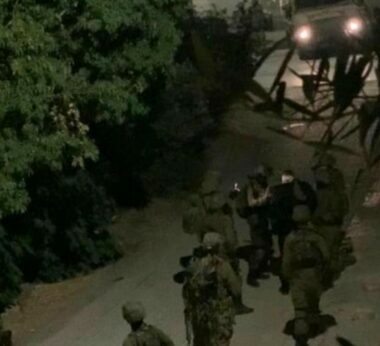 On Monday dawn, Israeli soldiers abducted thirteen Palestinians from their homes, and injured one, in several parts of the occupied West Bank, the Palestinian Prisoners’ Society (PPS) said.

The soldiers also invaded the nearby villages and towns of Faqqu’a, Aneen, Tayba, Rommana, Toura, al-Arqa, and Zabbouba, and fired many gas bombs and concussion grenades at Palestinian workers near the gates of the Annexation Wall while trying to cross.

The invasion led to protests before the soldiers shot a young man with a live round in the abdomen; Palestinian medics rushed him to a hospital.

In Hebron, in the southern part of the occupied West Bank, the soldiers abducted three Palestinians, including a teenage boy.

The PPS office in Hebron said the soldiers abducted a child, Nizar Abu Aisha, after storming and ransacking his family’s home in the Abu Romman Mountain area in Hebron city.

It added that the soldiers also abducted Anan Mohammad Abu Afifa and Hazem Thiab from their homes in the al-‘Arroub refugee camp north of the city.

The soldiers also invaded the Dahiat al-Baladiyya area, Wad al-Harya, and Jaber neighborhood in Hebron before storming and violently searching homes owned by Palestinians from the local Jaber and Abu Sneina families.

In addition, the army installed roadblocks on Hebron’s Northern Roads and the main streets leading to the towns of Beit Kahil, Sa’ir, and Halhoul, stopped and searched dozens of cars, and interrogated many Palestinians while inspecting their ID cards.

The Palestinian Prisoners Society identified the abducted Palestinians as: