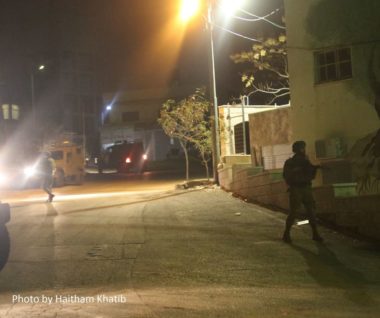 Abdullah Abu Rahma, a former political prisoner and the coordinator of the Popular Committee against the Annexation Wall and Colonies in Bil’in, said the soldiers invaded and searched homes, and abducted Ahmad, 43, and his brother Mustafa Khatib, 48.

He added that the soldiers fired live rounds, concussion grenades, and rubber-coated steel bullets at Palestinians who protested the invasion.

In related news, the soldiers abducted a young Palestinian man, and confiscated a bulldozer in the towns of Askar al-Balad and Salem, east of the northern West Bank city of Nablus.

On Tuesday evening, dozens of Palestinians suffered the severe effects of teargas inhalation after Israeli soldiers invaded Beit Ummar town, north of the southern West Bank city of Hebron, and fired gas bombs at homes and a mosque.