Israeli Soldiers Abduct A Palestinian, Summon Two Others For Interrogation, In Bethlehem 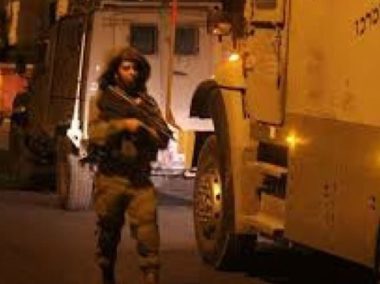 Israeli soldiers abducted, on Wednesday at dawn, a young Palestinian man, and summoned two others, including a journalist, for interrogation, in Bethlehem Governorate, south of occupied East Jerusalem, in the West Bank.

The Palestinian identified the Palestinian as Ahmad Harbi Abu Odah, 23, was cuffed by the soldiers who took him to Etzion military base and security center, south of Bethlehem.

In Beit Fajjar town, south of Bethlehem, the soldiers invaded and searched the homes of Hatem and his brother Samir Ibrahim Thawabta.

In related news, the soldiers abducted a young Palestinian man, and confiscated a bulldozer in the towns of Askar al-Balad and Salem, east of the northern West Bank city of Nablus.

On Tuesday evening, dozens of Palestinians suffered the severe effects of teargas inhalation after Israeli soldiers invaded Beit Ummar town, north of the southern West Bank city of Hebron, and fired gas bombs at homes and a mosque.