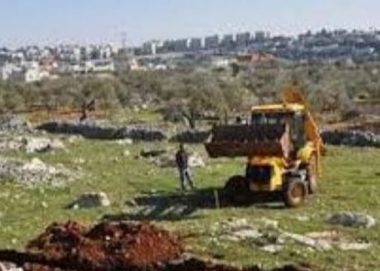 The Israeli army claimed the soldiers are searching for what it called “illegal irrigation systems.”

Dirar Sawafta, a member of Bardala Village Council, said many soldiers invaded the lands, and dug three holes around irrigation lands, trying to find what the army described as “illegal connections to the main water system.”

He added that the soldiers frequently dug around the main line, under the same allegations.

Water shortages are one of the most issues the Palestinians face is the occupied West Bank, not only the Northern Plains of the West Bank, but in many parts of the territory, an issue which severely devastates agriculture, and the livelihoods on hundreds of families.

In Summer, the Palestinians go for several weeks at a time without running water, and in numerous cases, the army demolishes Palestinian water wells, while the illegal colonialist settlers   suffer from water shortages, or interruptions, for their homes, colonies’ lands and swimming pools.