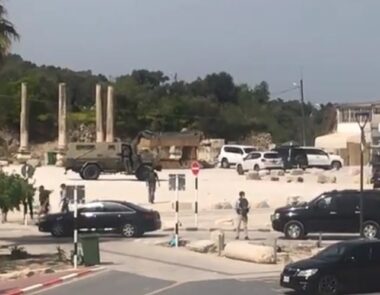 Israeli soldiers closed, for the second day, the archeological site in Sebastia Palestinian town, north of Nablus, in northern West Bank, to allow groups of colonialist settlers into it.

The Mayor of Sebastia, Mohammad Azem, said dozens of illegal colonialist settlers, accompanied by many soldiers invaded the site after the soldiers closed the entire area to the Palestinians.

Azem added that the soldiers closed the site on Tuesday, and continued the closure Wednesday, to prevent the Palestinians from reaching it.

In related news, a group of illegal Israeli colonists, accompanied by many soldiers, invaded an archaeological site, Tuesday, in the Sammoa’ Palestinian town, south of Hebron, in southern West Bank.