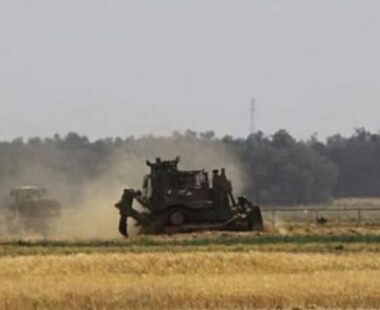 Eyewitnesses said the military vehicles came from Kissufim base, across the fence, southeast of Deir al-Balah, and advanced dozens of meters into the farmlands.

They added that the soldiers bulldozed and uprooted the lands and installed sand hills close to the perimeter fence while firing sporadic live rounds and smoke bombs.

It is worth mentioning that the National Resistance Brigades, the armed wing of the Democratic Front for the Liberation of Palestine (DFLP), said a group of its fighters exchanged fire with the invading soldiers.

The army carries out repeated invasions into Palestinian lands across the fence, along the northern and eastern parts of the coastal region.

The army also frequently fires at the farmers, and shepherds, and forces them out of their lands, in addition to the repeated assaults against workers, and fishermen in Palestinian territorial waters, leading to dozens of casualties, including fatalities.