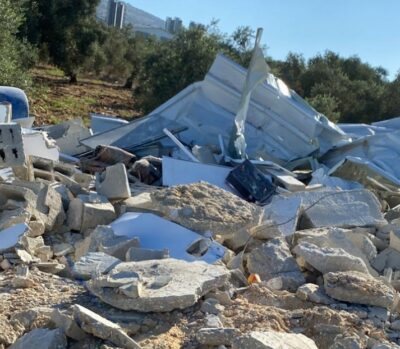 On Tuesday morning, Israeli soldiers demolished a coffee shop at the junction of Ya’bad town, southwest of the northern West Bank city of Jenin.

Mohammad Khaled Atatra said several army jeeps and bulldozers invaded the area and demolished the coffee shop he owns along with his brothers Essam and Husam.

Mohammad added that the coffee shop was only 100 square meters and said the demolition was the fourth and was carried out without a prior warning.

The Israeli army claims the shop was built without a permit from the so-called “Civil Administration Office,” the administrative branch of the illegal occupation.