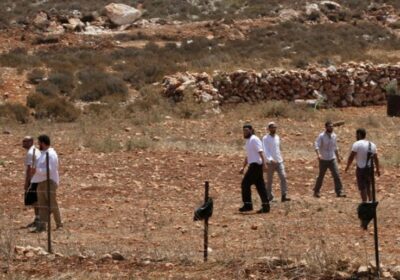 HEBRON, Tuesday, July 26, 2022 (WAFA) – Israeli colonizers today attacked farmers and herders in Khirbet Aqwewis in Masafer Yatta, in the South Hebron Hills, according to one of the farmers.

The farmer, Jibril Abu Arram, told WAFA that colonizers from Mitzpe Yair and Susiya, built illegally on usurped Palestinian-owned land east of Yatta town, attacked the farmers with batons, cursed them with profanity, and let their livestock graze in the wheat and barley crops and olive seedlings destroying the crops and the olive saplings.

The coordinator of the Popular Committees to Resist the Wall and Settlements east of Yatta, Ratib al-Jabour, told WAFA that the heavily armed settlers, under army protection, have escalated their attacks against Palestinians in Yatta and in the villages and hamlets of Masafer Yatta by attacking homes and structures, grazing their livestock on the crops, destroying electricity networks, and stealing drinking water to force people to leave their homes and lands in favor of settlement expansion.