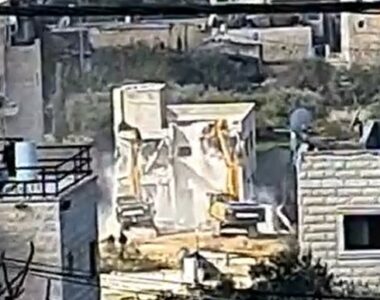 On Tuesday, Israeli soldiers demolished a Palestinian home in Beit Safafa town, southeast of occupied Jerusalem, in the West Bank.

They added that the home, owned by Palestinians from the Sonoqrot family on their land, was a two-story building.

The army claims the home was built without a construction permit from the City Council in occupied Jerusalem.

Last Friday, the Israeli occupation authorities forced a Palestinian to demolish his home in Beit Hanina town, north of Jerusalem.

At the same time, Israel continues to build and expand its illegal, segregated colonies in the occupied West Bank, including Jerusalem, in direct violation of International Law, the Fourth Geneva Convention, and various United Nations and Security Council resolutions.

The Israeli Committee Against House Demolitions (ICAHD) has revealed that, in 2022, Israel demolished 928 structures and displaced 953 Palestinians, with a further 28.255 Palestinians affected.

ICAHD added that in 2021, 3004 structures were demolished in the Negev/Naqab – 431 homes and 2553 agriculture and livelihood structures.