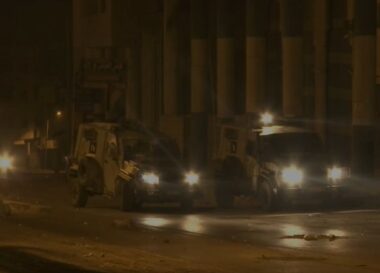 Late Tuesday night, Israeli soldiers injured many Palestinians and abducted one after several army vehicles invaded the eastern area of Nablus city, in the northern part of the occupied West Bank.

Media sources said many army vehicles, including bulldozers, invaded the eastern area before the military bulldozers started installing dirt mounds and closing streets leading to Joseph’s Tomb in the city ahead of accompanying dozens of illegal colonizers to the area.

Media sources said many Palestinians protested the invasion and hurled stones at the army vehicles before the soldiers fired a barrage of live fire, rubber-coated steel bullets, and gas bombs at the protesters and surrounding homes.

Palestinian medics provided treatment to many Palestinians who suffered the effects of tear gas inhalation.

Also, an army jeep rammed a young Palestinian man while the soldiers shot a young man with a high-velocity gas bomb before they were rushed to a hospital in Nablus.

Furthermore, the soldiers abducted a young man and took him to an unknown destination.

In addition, the army attacked journalists while trying to force them out of the invaded area and prevented them from reaching it.

It is worth mentioning that the army frequently invades the eastern area of Nablus to accompany the colonists into the Joseph’s Tomb historic site, an issue that leads to protests, in addition to the ongoing invasions of homes and the abduction of many Palestinians.

On December 22nd, the soldiers killed Ahmad Atef Mustafa Daraghma, 23, from Tubas in the northeastern West Bank, after shooting him with two live rounds in the back and one in the leg in the eastern area of Nablus. The soldiers also shot six Palestinians with live fire, including three who suffered life-threatening wounds