Army Demolishes A Home In Silwan 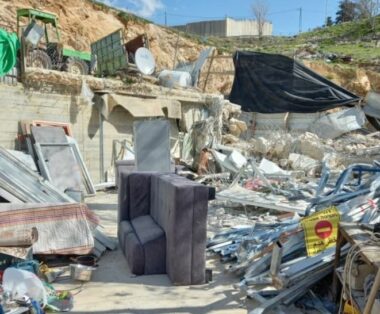 Israeli soldiers demolished, Tuesday, a Palestinian home in Ras al-‘Amoud neighborhood in Silwan town, in occupied Jerusalem, allegedly for being built without a permit.

The Wadi Hilweh Information Center in Silwan (Silwanic) said the home is owned by Jihad Abu Ramouz, and was built on his land.

Abu Ramouz told Silwanic that the soldiers, accompanied by members of the City Council, and bulldozers, invaded the neighborhood in the morning hours, before forcing his and his family in the cold.

He added that the soldiers only allowed the family to remove a few things out of the property before demolishing it.

The Palestinian lived in the property along with his wife and children; the demolished home was built using bricks and tin, and was only 90 square/meters.

It is worth mentioning that, in August of last year, the army demolished the family home for the first time, and the City Council continued to deny all appeals and permits.

In related news, the soldiers invaded a privately-owned Palestinian land in Jabal al-Mokabber town, in occupied East Jerusalem, and removed the barbed-wire fences surrounding it.