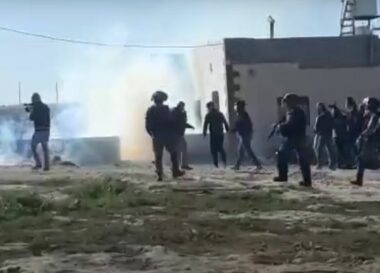 They added that the soldiers also demolished a residential tent in the al-Bweib area, east of Yatta, owned by Mahmoud Khalil Da’ajna.

During the invasion, the soldiers assaulted several Palestinians and attempted to abduct some of them.

In related news, the soldiers injured five Palestinians, including children, and abducted three others, after the army invaded the al-Khaldiyya area, in Yatta town, south of Hebron city, and demolished a home.

It is worth mentioning that, over the past several months, the soldiers escalated their violations, and demolished many tents, sheds, and water wells, chased and assaulted shepherds, prevented farmers from reaching their lands and uprooted dozens of trees in Hebron.

In related news, the soldiers demolished a residential room and uprooted dozens of olive trees, west of Hares town, north of the central West Bank city of Salfit.

The room, owned by Qassem Ali Abu Wazza, was built on his own land nearly thirty years ago.