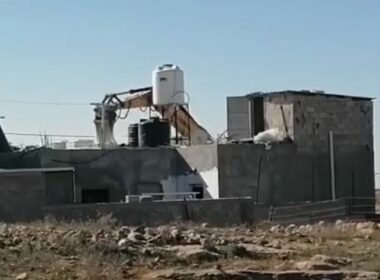 Israeli soldiers injured, on Tuesday before noon, five Palestinians, including children, and abducted three others, after the army invaded the al-Khaldiyya area, in Yatta town, south of Hebron city, in the southern part of the occupied West Bank, abducted three, and demolished a home.

The coordinator of the Protection and Steadfastness Committees in the Hebron Hills, Fuad al-‘Amour, stated that a large military force, accompanied by bulldozers, invaded the al-Khaldiyya area to demolish a three-story home.

Al-‘Amoud added that dozens of residents protested the invasion and closed roads leading to the property, owned by Khalil Issa Rib’ey.

The soldiers fired a barrage of gas bombs and rubber-coated steel bullets at the residents, injuring at least five Palestinians, including children, and causing dozens to suffer the effects of teargas inhalation, and abducted three others.

The soldiers demolished the property under the pretext of being built without a permit from the “Civil Administration Office,” the administrative branch of Israel’s illegal occupation on the West Bank.

It is worth mentioning that the home in close to the illegal Susiya and Avigal colonies, built on stolen Palestinian lands.