Army Demolishes The Home Of A Palestinian Detainee In Ramallah 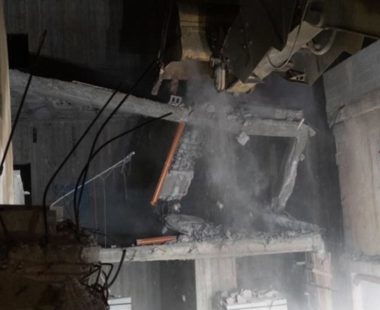 Israeli soldiers demolished, on Thursday at dawn, the family home of a Palestinian detainee, identified as Islam Abu Hmeid, in the al-Am’ari refugee camp, in the central West Bank city of Ramallah.

Media sources said a large military force, including armored bulldozers and vehicles, invaded the refugee camp, and demolished the property.

The demolition of the property was carried out after the Palestinians managed to rebuild it; it was previously demolished a few times. (Also Read — Abu Hmeid Home: Mass Collective Punishment Targeting Entire Families, As Israeli Army Detonates Home In Ramallah)

It is worth mentioning that Islam’s mother, 73 years of age, has a son, Abdul-Mon’em Abu Hmeid, who was killed by the army on May 31, 1994, in nearby Qalandia refugee camp, in addition to five other sons, imprisoned by Israel, four of them are serving life terms.

The army claims that Islam Abu Hmeid, 33, who was taken prisoner on June 6th, 2018, killed an Israeli soldier, identified Ronen Lubarsky, after dropping a slab on his head, on May 24th 2018, during a military invasion into the refugee camp, causing a very serious injury resulting in his death on May 26th.

An Israeli court sentenced Islam to life in prison, in addition to a fine of 258.000 Shekels to be paid to the family of the slain soldier.