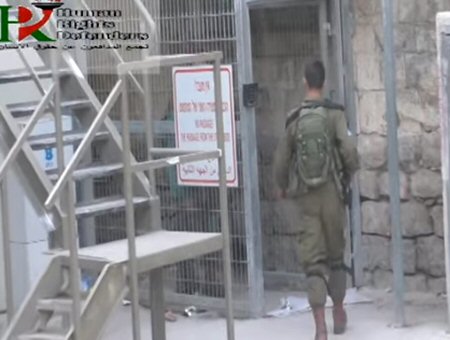 After footage emerged of a 15-year-old Palestinian being detained at gunpoint in the occupied West Bank city of Hebron — which local activists said depicted an attempt by Israeli forces to plant a knife on the teen before killing him — the Israeli army denied the activists’ claim, calling the reports “false manipulations and an attempt to distort the truth.”

The footage showed an Israeli soldiers approaching the checkpoint with a knife in his hand, before another soldier leads 15-year-old Muhammad Qazzaz away.

In response to a request for comment, an Israeli army spokesperson wrote to Ma’an News Agency on Tuesday, saying that the knife was found in the “terrorist’s” possession after he arrived at the checkpoint.

According to the spokesperson, who asked Ma’an to change the headline in the initial report of the incident, Qazzaz later admitted during interrogation that “he planned to carry out a terror attack in the Jewish Quarter in Hebron.”

The spokesperson confirmed that Qazzaz had not yet been charged and that investigations were still underway.

However, local activists with the group Human Rights Defenders — Zeidan al-Sharabati, who filmed the incident, and eyewitness Badi al-Dweik — claimed that the detention could have taken a deadly turn if the encounter had not been filmed, and alleged soldiers were planning on planting the knife on the scene.

When al-Sharabati arrived near the checkpoint, he said he saw Qazzaz flat on the ground with a soldier, pointing a machine gun the boy’s head, placing his boot on Qazzaz’s neck.

According to al-Sharabati and al-Dweik, many local Palestinians had gathered around the checkpoint to witnesses the violent detention, one of which, who understood Hebrew, heard a soldier telling another soldier to shoot and kill Qazzaz.

The Palestinian bystander repeatedly shouted out to the soldiers “I understand Hebrew! Don’t kill him!”

Later, Israeli soldiers tried to force those who were filming to go away, the activists said, who insisted if that if witnesses hadn’t been there to document the event, Qazzaz would have been killed and the knife would have been planted beside his body.

Israeli forces have detained scores of Palestinians for allegedly being in possession of knives in recent months following a spate of alleged and actual small-scale knife attacks by Palestinians that surged in the fall of 2015.

Rights groups have disputed Israel’s version of events in a number of cases, denouncing what they have termed as a “shoot-to-kill” policy against Palestinians who did not constitute a threat at the time of their death, or who could have been subdued in a non-lethal manner — amid a backdrop of impunity for Israeli forces who have committed the killings.

Eyewitnesses have also said in a number of cases that Israeli security forces planted knives on slain Palestinians to claim that they were acting in self-defense during a stabbing attack.

Meanwhile, rights groups have widely documented the abuse and mistreatment of Palestinian children by Israeli forces and the harsh interrogation practices used to force their confessions.

Hebron in particular grew as the epicenter of upheaval, with a number of Palestinians having been shot while being detained at military checkpoints in the area.

Al-Dweik said that after the killing of Palestinian Abd al-Fattah al-Sharif was caught on camera by Human Rights Defenders member Imad Abu Shamsiya in March 2016, the group had increased its efforts to capture Israeli violations of human rights on camera.