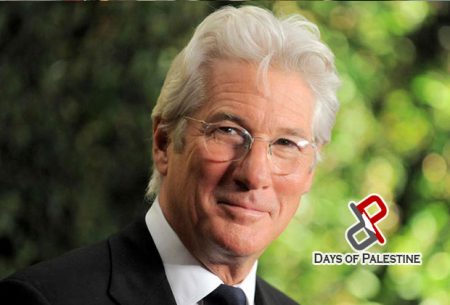 In an interview with the Israeli newspaper Haaretz, Gere said: “Obviously, this occupation is destroying everyone. There is no defense of this occupation.”

About the illegal Israeli Jewish settlement in the occupied Palestinian territories, he said: “Settlements are such an absurd provocation and, certainly in the international sense, completely illegal.”

He also ruled out settlement adoption as a way to make peace. “They [settlements] are certainly not part of the program of someone who wants a genuine peace process.”

Gere said that he does not like violence and noted that the Israelis should feel secure, but stressed that this must not be at the expense of the Palestinians.

“I denounce violence on all sides of this,” he said, “and, of course, Israelis should feel secure. But, Palestinians should not feel desperate.”

While speaking to Haaretz, Gere defended the Israeli NGO Breaking the Silence, which exposes crimes committed by the Israeli soldiers against the Palestinians on the ground.

He said that he was appalled by the demonization of the group by Israeli Prime Minister Benjamin Netanyahu and others.

“To question authority makes you a traitor?” he wondered. “If you question bad policies you are a self-hating Jew? That is insane. And, of course, it is the last resort of tyrants.”

Gere also criticized the American President Donald Trump because of his unbalanced policies regarding dealing with refugees.

“Trump has made refugee and terrorist the same meaning,” he said, “it was not so long ago that refugee was someone who was running from a fire. Someone who needed help… And, now, that person is a terrorist, a dangerous person, someone to be shunned and kept out.”

Called for everyone to speak out against Trump, not only celebrities. “Everybody needs to speak out, no matter what their job description is,” he said.

Haaretz concluded a long article with Gere’s quotes: “We have to be vigilant. We have to make sure we are involved with elections [so] that we do not allow someone like Trump to be elected again, and that we don’t allow people like his advisers to be running our government again. We got lazy. Democracy does not work if you are lazy. Because then the bad guys take over.”