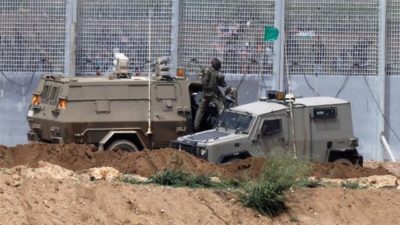 The Israeli military detained a Palestinian youth, on Monday, after he allegedly tried to enter into Israel, the lands occupied in 1948, through the so-called security fence around the besieged Gaza Strip, according to an army statement.

An army force arrested a Palestinian who was attempting to infiltrate through the border fence from southern Gaza.”

The young man, who was not identified, was detained by the army force and taken to an unknown location.

The Israeli occupation has held the Gaza Strip under a criminal blockade of the air, land and sea since 2007, causing a humanitarian catastrophe for its more than two million inhabitants.

Israeli forces detained a Palestinian man from the Container military roadblock, north of Bethlehem in the central West Bank, as he was headed to a Bethlehem hospital for extensive treatment after a serious traffic accident left him in a wheelchair, just one month ago.

Furthermore, the army detained four more Palestinians, including two children in the southern occupied West Bank city of Hebron, before releasing them.