Army Fires A Missile At A Motorcycle In Gaza 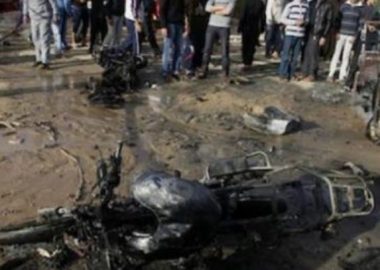 An Israeli drone fired, Thursday, a missile at a Palestinian motorcycle east of Deir al-Balah, in central Gaza, causing damage.

Media sources in Gaza said the motorcycle, which was apparently parked, was destroyed by the missile, and added that the Israeli attack did not lead to any casualties.

As the Palestinians continue to hold the processions of the “Great Return March,” in several parts of the Gaza Strip, demanding independence and their internationally-guaranteed Right Of Return, the Israeli army continues to carry out frequent attacks against them.

On Wednesday evening, a Palestinian teen, Mahmoud Majed Gharabli, 16, died from serious wounds he suffered, on May 14th, after an Israeli army sniper shot him east of Gaza city.

His death brings the number of Palestinians, who were killed in the Gaza Strip since the beginning of the Great Return March on March 30th, to 136, including 17 children and two women, as confirmed by the Health Ministry in Gaza.