Army Injures 71 Palestinians, Including 30 Children, 3 Women and 1 Medic, In Gaza 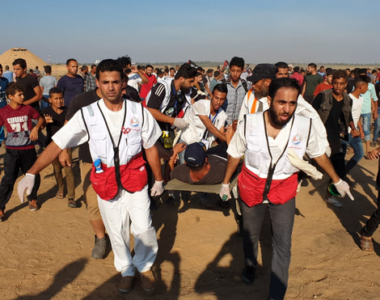 Palestinian Center for Human Rights (PCHR) has reported that Israeli soldiers injured, Friday, 71 Palestinians, including 30 children, one medic and three women, after the army attacked the Great Return March processions in the Gaza Strip.

The PCHR said the soldiers resorted to the excessive use of force against the protesters, especially by using live fire against unarmed civilians, protesting along the perimeter fence in the eastern parts of the Gaza Strip.

It stated that 39 of the wounded Palestinians were shot with live fire, including one who suffered life-threatening injuries, and four who sustained moderate-to-serious injuries.

This Friday’s processions came in solidarity with the Palestinian refugees in Lebanon, and lasted three hours, from 4:30 in the afternoon until 7:30 in the evening.

The PCHR added that the protesters mostly gathered in and around the five protest encampments and were hundreds, and in some cases, dozens of meters away from the perimeter fence, yet, were faced with the excessive use of force by the soldiers who were not in any form of danger.

It also said that, despite Israeli media reports about the open fire regulations when dealing with the Great Return March procession, such as using sniper fire to wound protesters in the lower extremities, the PCHR documented many cases where the Israeli sharpshooters wounded protesters in the chest and upper extremities, causing several injuries, including four that were described as moderate-to-severe.

The PCHR also said that these cases prove that the army has not changed its policies of the excessive use of force against the unarmed protesters.

In addition, the PCHR referred to a report published last Tuesday by the Israeli newspaper, Yedioth Aharonot, in which is said that the army has, in recent months, been training the soldiers on a new type of a sniper rifle, which indicates that the military is using the Palestinians as target practice for its weapons, in direct violation of all international laws and regulations, including human rights treaties and International Humanitarian Law.

According to extensive and ongoing PCHR documentation, the Israeli army has killed 207 Palestinians, including 44 children, two women, 9 persons with special needs, four medics and two journalists, in addition to wounding 13323 Palestinians, including 2742 children, 409 women, 221 medics and 207 journalists, since the Great Return March processions started on March 30 2018.