Army Injures Dozens Of Palestinians In Abu Dis And Bethlehem 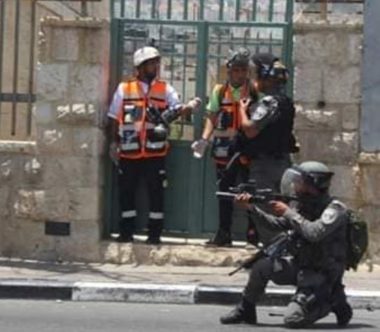 Israeli soldiers injured, on Wednesday morning, dozens of Palestinians in Abu Dis town, southeast of occupied East Jerusalem, and in Bethlehem, after the army attacked a protest against Trump’s so-called “Deal of the Century.”

Media sources said the soldiers fired a barrage of gas bombs at Palestinian protesters near the al-Quds University, in Abu Dis town, causing at least three to suffer the effects of teargas inhalation.

The wounded residents received treatment by Red Crescent medics without the need for hospitalization.

In Bethlehem, south of Jerusalem, the soldiers resorted to the excessive use of force against nonviolent protesters, near Marah Bin Rabah Mosque at the northern entrance of Bethlehem and fired a barrage of gas bombs.

The Palestinians are holding dozens of protests across occupied Palestine, including the occupied capital Jerusalem, rejecting the attempts of the U.S. Administration to void the internationally guaranteed Palestinian rights of self-determination, independence and sovereignty in their own homeland.