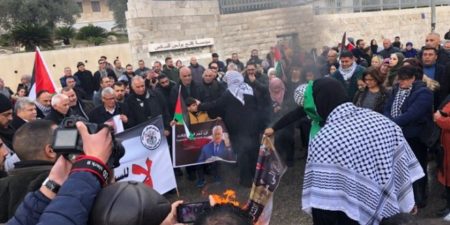 – Soldiers shoot a Palestinian child, 14, with a rubber-coated steel bullet i8n the head, and cause dozens of residents to suffer the effects of teargas inhalation, in the al-‘Arroub refugee camp, north of Hebron.

– Army injures seven Palestinians in Bethlehem, including one in the head.

– Soldiers detain cameraman, Suleiman Abu Srour, who works for the Palestinian News & Info Agency (WAFA), and Palestine TV cameraman, Omar Abu Awad, for more than two hours while documenting procession in the West Bank’s Jordan Valley, and threaten to imprison them if they continue news coverage.

The Palestinian Red Crescent said that its crews dealt with 11 injuries, one of which was a rubber-coated bullet to the head, in the Al-Aroub camp, north of Hebron, in southern West Bank.

Palestine News Network (PNN) has reported that the soldiers, stationed at the entrance to the camp, fired tear gas canisters towards the march, which led to the injury of a citizen with a rubber-coated bullet to the head.

In the city of Bethlehem, Israeli occupation forces stationed at the northern entrance to the city, this afternoon, suppressed a march that condemned the so-called “Deal of the Century.”

The march started from the Deheisheh camp toward Rachel’s Tomb, at the northern entrance to the city of Bethlehem.

In the Jordan Valley, 10 citizens suffocated after occupation forces’ repression of the participants in popular activities condemning the “Deal of the Century” and the endeavors to annex the northern Jordan Valley.

The soldiers also tightened military measures in the Jordan Valley, and have erected many flying checkpoints in various areas, to prevent the arrival of citizens from various governorates there.

In occupied Jerusalem, clashes broke out between youth and occupation forces near the University of Al-Quds, in the town of Abu Dis, where occupation soldiers fired gas bombs and rubber-coated metal bullets at citizens and students, closing the main street near the university, with no casualties reported.