Mass Rallies in Several Countries in Protest of Trump Deal 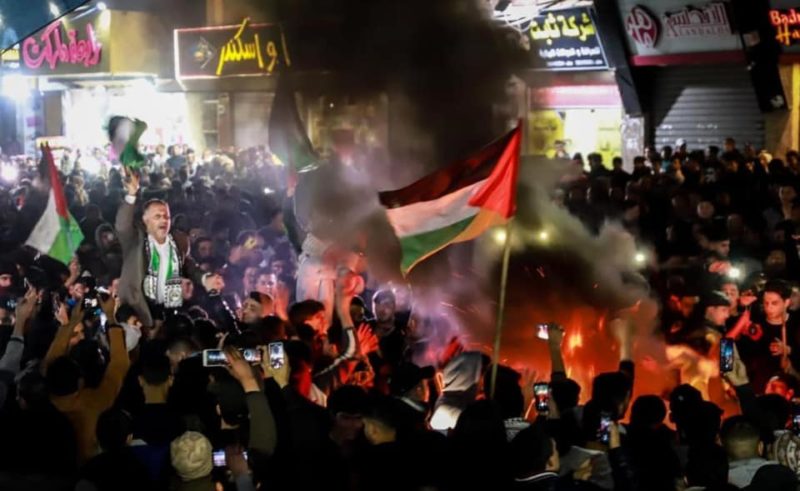 In Gaza, rallies took place in a number of cities, rejecting the plan announced by Trump from Washington.

According to Al Ray Palestinian Media Agency, the demonstrators say the plan ignores Palestinian rights and principles, and violates all international agreements, especially with regard to Jerusalem and the right of return, stressing that it shows the gravity of American collusion with the Israeli occupation state.

Dozens of Palestinians demonstrated in Haifa, carrying banners reading “Yes to national unity, enough for Oslo and its aftermath,” and “The deal of the century will not pass from Haifa.”

In the cities of Ramallah, Tulkarem, Jenin, and Bethlehem, in the West Bank, several demonstrations took place in the streets, the demonstrators announcing their rejection of the US “deal,” while Palestinian mosques opened the Holy Qur’an via loudspeaker, to mourn the announcement of the deal.

Protesters in Tulkarem burned pictures of President Trump, and announced a commercial strike for Wednesday afternoon, while the Palestinian Coordination Committee in the city of Hebron launched a series of activities.

In Jordan, youth and popular parties organized a protest in front of the American embassy in Amman, coinciding with the announcement of the plan. The protesters denounced what they described as the American bias to the Israeli occupation and its attempt to liquidate the Palestinian issue and confiscate the Palestinian people’s right to self-determination and its right to occupied Jerusalem.

In Turkey, activists demonstrated in front of the American embassy in Ankara and the American consulate in Istanbul, stressing their non-recognition of what they described as the “Zionist entity” and carrying banners displaying phrases like “Jerusalem for Muslims” and “We are vigilant for Palestine.”

Activists gave speeches in Ankara, stating that the plan came to implement the Greater Israel project that began a century ago, in the Middle East.

Members of the Palestinian and Arab community and German solidarity protesters raised the Palestinian flags in front of the Washington embassy, in the German capital of Berlin, immediately after Trump announced his plan, chanting slogans expressing their complete rejection of the plan, and raising banners affirming that Jerusalem is the capital of the Palestinian state, and that the right of return not negotiable.

The head of the Popular Conference for Palestinian Abroad, Majed Al-Zeer, said in a speech that Trump, like his predecessors, cannot skip the Palestinian right and exceed its demands, calling on German Chancellor Angela Merkel to take a stance  that rejects the plan.

US President Donald Trump’s long-awaited Middle East plan was denounced by some as “aggressive” and “one-sided” while others say the initiative “could prove a positive step forward.”

“My vision presents a win-win solution for both sides,” he said, adding that Israeli leaders have said they will endorse the proposal. Here is how the world reacted to the announcement, according to Al Jazeera:

Yousef al-Otaiba, the United Arab Emirates’ ambassador to Washington, said the plan “offers an important starting point for a return to negotiations within a US-led international framework.”

“The only way to guarantee a lasting solution is to reach an agreement between all concerned parties,” al-Otaiba said in a statement, on Tuesday.

“The UAE believes that Palestinians and Israelis can achieve lasting peace and genuine coexistence with the support of the international community.”

Iranian officials dismissed the so-called “peace proposal” as “a plan of imposition and sanctions.”

Hesameddin Ashena, an adviser to Iran’s President Hassan Rouhani, said, on Twitter: “This is a deal between the Zionist regime (Israel) and America. Interaction with Palestinians is not on its agenda. This is not a peace plan but a plan of imposition and sanctions.”

Later, Iran’s foreign ministry said in a statement that the proposal was the “treason of the century” and bound to fail.

Jordan warned against “annexation of Palestinian lands” with the kingdom’s foreign minister warning against the “dangerous consequences of unilateral Israeli measures that aim to impose new realities on the ground.”

Ayman Safadi called for direct negotiations that solve all final status issues in a comprehensive solution, in accordance with established terms of reference, the Arab peace initiative and international law.

“Establishment of a Palestinian state with East Jerusalem as its capital on the basis of a two-state solution is the only path to comprehensive and lasting peace,” Safadi said, in a statement.

“Jordan supports every genuine effort aimed at achieving just and comprehensive peace that people will accept,” he said.

Dozens of protesters gathered outside the US embassy in Amman to protest Trump’s plan, shouting slogans including “No to normalisation” and “We will not recognise Israel.”

Sami Abu Zhuri, an official of Hamas which governs the Gaza Strip, said Trump’s statement was “aggressive and will spark a lot of anger.”

“After the nonsense that we heard today, we say a thousand no’s to the Deal of The Century,” PA President Mahmoud Abbas said at a press conference, in the West Bank city of Ramallah, where the Palestinian Authority is headquartered.

He said that Palestinians remain committed to ending the Israeli occupation and establishing a state with its capital in east Jerusalem.

“We will not kneel and we will not surrender,” Abbas said, adding that the Palestinians would resist the plan through “peaceful, popular means.”

Egypt urged Israelis and Palestinians to “carefully study” the proposal. The foreign ministry stated that the plan favours a solution which restores all the “legitimate rights” of the Palestinian people through establishing an “independent and sovereign state on the occupied Palestinian territories.”

Egypt, which along with Jordan is the only Arab country to have made peace with Israel, said it appreciates the US administration’s efforts to try to resolve the decades-old conflict.

Numan Kurtulmus, deputy chairman of Turkey’s ruling Justice and Development Party (AK), also slammed Trump’s statements on Jerusalem, saying: “No, Trump! Jerusalem is the capital of the Palestinian state and the heart of the Islamic world!”

Calling the plan “deal of shame,” Lebanon’s Hezbollah movement said it was a very dangerous step which would have negative consequences on the region’s future, according to Al Manar TV.

It also said the proposal would not have happened without “complicity and betrayal” of several Arab states.

Mohammed Ali al-Houthi, a leader of Yemen’s Houthi rebels, said Trump’s proposal was “blatant US aggression on Palestine and the nation.”

“It is a deal funded by Saudi (Arabia) and the UAE (United Arab Emirates) to cement Israeli occupation,” he said. “The people of the region have to bear the responsibility of standing up to this danger and facing it with every possible and legitimate means.”

“The leaders (Johnson and Trump) discussed the United States’ proposal for peace between Israelis and Palestinians, which could prove a positive step forwards,” he said.

Dominic Raab, Britain’s foreign minister, called on Israeli and Palestinian leaders to give fair consideration to the initiative.

“This is clearly a serious proposal, reflecting extensive time and effort,” said Raab in a statement. “We encourage them (leaders) to give these plans genuine and fair consideration, and explore whether they might prove a first step on the road back to negotiations,” he said.

United Nations Secretary-General Antonio Guterres according to his spokesperson Stephane Dujarric said the UN supports two states living in peace and security within recognised borders, on the basis of the pre-1967 borders. “The position of the United Nations on the two-state solution has been defined, throughout the years, by relevant Security Council and General Assembly resolutions by which the Secretariat is bound,” Guterres spokesman Stephane Dujarric said, in a statement.

“The United Nations remains committed to supporting Palestinians and Israelis to resolve the conflict on the basis of United Nations resolutions, international law and bilateral agreements and realizing the vision of two States – Israel and Palestine – living side by side in peace and security within recognized borders, on the basis of the pre-1967 lines,” he added.

The comments are at odds with Trump’s plan, which overwhelmingly eschews the international consensus on the conflict, denying Palestinian refugees their right of return and greatly shrinking their borders within the West Bank while legitimizing Israeli settlements that are illegal under international law.

The plan grants Israel nearly all of its demands while foregoing many key aspects sought by the Palestinians.

Among those, Jerusalem will remain Israel’s “undivided capital,” Trump said while rolling out the plan.

Trump released via Twitter a copy of his “conceptual map” for a two-state solution that included a greatly reduced Palestinian territory in the West Bank, which also included 15 “Israeli Enclave Communities” linked by Israeli access roads that cut through the envisioned Palestinian territory. That would recognize Israeli sovereignty over existing settlements, which are illegal under international law.

It further links the West Bank and the Gaza Strip by tunnel, but Gaza is not permitted port access. That is only allowed at the Israeli ports of Ashdod and Haifa.

It does apportion two bubble-like areas of the arid Negev desert to the future state of Palestine, linked to the Gaza Strip with small territorial corridors, after Trump said his plan would double the amount of territory claimed by Palestinians.