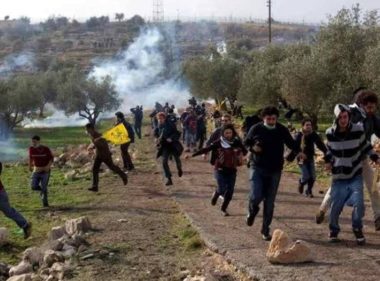 The soldiers attacked the protesters with rubber-coated steel bullets, gas bombs and concussion grenades, causing dozens to suffer the effects of teargas inhalation.

Medical sources said one Palestinian was shot with a rubber-coated steel bullet in his face, and was rushed to Palestine Medical Complex in Ramallah.

The soldiers also shot a photojournalist, identified as Mohammad Hamdan, with a rubber-coated steel bullet in his leg.

Despite the rain, the Palestinians and the internationals marched towards the lands, and held noon prayers on the Mountain, before starting the nonviolent procession.

The soldiers then started firing many gas bombs, concussion grenades and rubber-coated steel bullets at them.

The Palestinian Red Crescent Society (PRCS) said its medics provided the needed treatment to dozens who suffered the effects of teargas inhalation.

In addition, the soldiers installed a roadblock on the main road leading to villages west of Ramallah, stopped and searched dozens of cars, and did not allow the residents to cross.

Israel is trying to illegally confiscate the lands, owned by the Palestinians from the three villages, to use them for its colonialist activities and for military purposes.