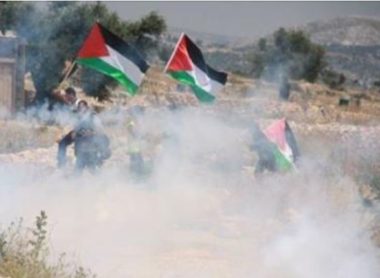 Israeli soldiers attacked, Friday, the weekly nonviolent procession against the Annexation Wall and colonies, in Bil’in village, west of the central West Bank city of Ramallah.

The soldiers fired many gas bombs and concussion grenades at the nonviolent protesters, causing many to suffer the effects of teargas inhalation.

Media sources in Bil’in said the soldiers also used a surveillance drone to film the protesters.

Bil’in has been a leading example of popular nonviolent protests against the illegal Israeli annexation wall and colonies, for the last thirteen years, and has been subject to constant military invasions and violation.

The army’s use of excessive force against the nonviolent protesters has led to hundreds of injuries, dozens of them seriously, in addition to killing Bassem Abu Rahma, in April 2009, after shooting him with a high-velocity gas bomb in the chest, and his sister, Jawaher, who died in 2010 from the severe effects of teargas inhalation.

Their brother, Ashraf Abu Rahma, was shot in his leg in 2008, by a soldier, after he was bound and blindfolded, and was ordered to stand behind their vehicle. The incident was caught on film by a girl from Bil’in, and the soldiers later targeted her and her family.