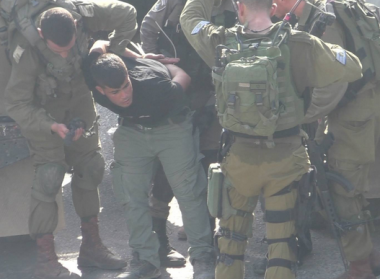 Israeli soldiers invaded, Friday, Beit Ummar town, north of the southern West Bank city of Hebron, and clashed with dozens of youngsters, before shooting a teen with live fire, and ten youngsters with rubber-coated steel bullets, and causing many others to suffer the effects of teargas inhalation.

Medical sources said the soldiers shot a 10-year-old teen with a live round in his left thigh, before he was rushed to a Palestinian hospital in a moderate condition.

The clashes started after the soldiers invaded the town, and assaulted hundreds of Palestinians, marching against the ongoing and escalating Israeli violations against Al-Aqsa Mosque, in occupied Jerusalem, and the entire Palestinian territories.

The soldiers shot at least ten Palestinians with rubber-coated steel bullets, and caused many others to suffer the severe effects of teargas inhalation.

Furthermore, the soldiers assaulted Mohammad Thiab Sabarna, 19, causing various cuts and bruises, before abducting him, and took him to an unknown destination.

The soldiers also used violence against Sabarna’s parents, and other family members, when they started talking with the soldiers, asking them to release him.