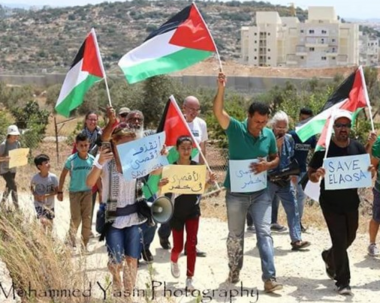 On Friday, many nonviolent Palestinian, Israel and international peace activists, held the weekly nonviolent procession against the Israeli Annexation Wall and Colonies, in Bil’in village west of Ramallah, in the occupied West Bank.

Some protesters managed to climb the Wall, and raised Palestinian flags on top of it.

The Popular Committee against the Wall and Colonies in Bilin called for more protests and activities to protest and counter the Israeli violations, and the restrictions imposed on the Palestinians, preventing them from enter Al-Aqsa.

Also on Friday, the soldiers killed three Palestinians, and wounded 380 others, during protests that took place after the army prevented hundreds of Palestinians from entering Al-Aqsa mosque for Friday prayers.