Army Injures Many Palestinians In Ni’lin 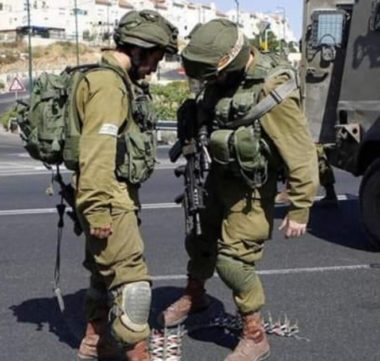 Israeli soldiers caused, Friday, dozens of Palestinians to suffer the severe effects of teargas inhalation, during the weekly nonviolent procession against the illegal Annexation Wall and colonies, in Ni’lin village, west of the central West Bank city of Ramallah.

The procession started after Friday prayers, when the protesters marched while carrying Palestinian flags, and chanted against the ongoing illegal Israeli occupation of Palestine, its colonies and escalated violations.

Some protesters also carried fire extinguishers in order to extinguish fires that could burn their farmlands and orchards due to Israeli gas bombs and concussion grenades.

The soldiers fired many gas bombs, concussion grenades and rubber-coated steel bullets, causing many to suffer the effects of teargas inhalation, in addition to causing fires in unplanted lands.

In related news, the soldiers detained three young Palestinian men at a sudden military roadblock which was installed on the Arab American University road, in the northern West Bank city of Jenin, and interrogated them for more than one hour, before releasing them. The three are from Zababda town, south of Jenin.

The soldiers also installed many roadblocks on roads leading to several villages and towns in Jenin Governorate, before stopping and searching dozens of cars.