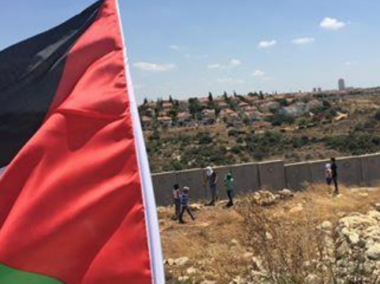 Israeli soldiers attacked, Friday, the weekly nonviolent procession against the Annexation Wall and Colonies in Ni’lin village, east of Ramallah, in central West Bank, causing many to suffer the effects of teargas inhalation.

The Popular Committee against the Annexation Wall and Colonies in Ni’lin, said the locals, accompanied by Israeli and international peace activists, marched from the center of the village, heading towards the Palestinian orchards, surrounded and isolated by the illegal Annexation Wall.

It added that protesters carried Palestinian flags, and chanted against the Israeli occupation of Palestine, its escalating violations and ongoing illegal colonialist activities on Palestinian lands, in direct violation of International Law and the Fourth Geneva Convention.

The soldiers fired a barrage of gas bombs at the nonviolent protesters, causing many to suffer the effects of teargas inhalation.

Today’s procession also marks the fifteenth anniversary of the advisory riling of the International Court, in which it rendered its ruling that the Annexation Wall is illegal, built on private and occupied Palestinian lands, and calling for compensating the Palestinians. Israel rejected the ruling and considered it to be “immoral.”