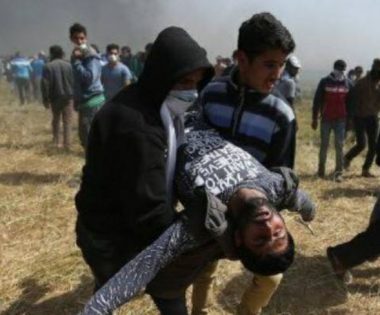 Israeli soldiers shot, Monday, six Palestinians, including a medic, in addition to causing dozens to suffer the effects of teargas inhalation, in border areas in several parts of the Gaza Strip.

They added that the soldiers also shot a medic with live fire while he was providing treatment to Palestinians who suffered the effects of teargas inhalation, east of the al-Boreij refugee camp, in central Gaza. The medic, identified as Emad al-Buheisi, was shot with a live round in his leg.

In addition, the soldiers targeted a procession of Palestinian journalists, protesting the escalating Israeli violations against them during their coverage of the ongoing processions, which led to many injuries and the death of their colleague Yasser Mortaja.

Furthermore, the soldiers fire live rounds and dozens of gas bombs at protesters near Malka junction, southeast of the Zeitoun neighborhood, in Gaza city.

In related news, in a video recorded by Israeli soldiers while shooting a Palestinian protester with sniper fire, the soldiers could be heard cheering and celebrating a “successful shot.”

Also on Monday, a Palestinian identified as Marwan Odah Qdeih, 45, died of critical wounds sustained a week earlier, on March 30th, at the Palestinian Land Day protests in the Gaza Strip.