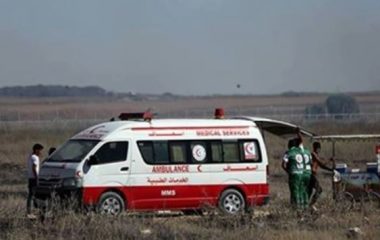 Medical sources at Nasser Hospital in Khan Yunis, in the southern part of the Gaza Strip, said the soldiers shot two Palestinians with live fire east of Khuza’a town, east of Khan Younis.

The sources added that the two Palestinians suffered moderate wounds and are recovering from their surgeries.

In addition, the soldiers opened fire at protesters in Malka Junction area, east of Gaza City, before shooting and moderately wounding a young man in his leg.

Many Palestinians suffered the effects of teargas inhalation, in addition to various cuts and bruises.

Also on Sunday, the Al-Qassam Brigades, the armed wing of Hamas, has reported that one of its fighters, identified as Tha’er Nayef az-Zare’ey, 30, was killed when a siege-busting tunnel collapsed on him near the border in Deir al-Balah, in central Gaza.

On Friday, the Palestinian Health Ministry has confirmed that Israeli soldiers shot and killed four Palestinians, including one child, and injured more than 729, including 24 children and twelve women, after the army resorted to the excessive use of force against protesters, on their lands, near the border fence, in the besieged Gaza Strip.