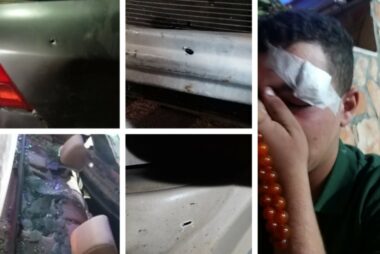 Israeli soldiers injured, Thursday, three Palestinians in the Yabrud bridge area, east of the al-Biereh city, in the Ramallah and al-Biereh governorate, in central West Bank.

Eyewitnesses said the soldiers fired several live rounds and rubber-coated steel bullets at a Palestinian car, forcing it to stop.

They added that the soldiers then attacked the driver and two passengers, causing various cuts and bruises, before leaving the area.

The soldiers had no reason to open fire at the car and did not abduct or detain the Palestinians.

Palestinian medics rushed to the scene and moved the three injured young men to a clinic in Silwad town, northeast of Ramallah.