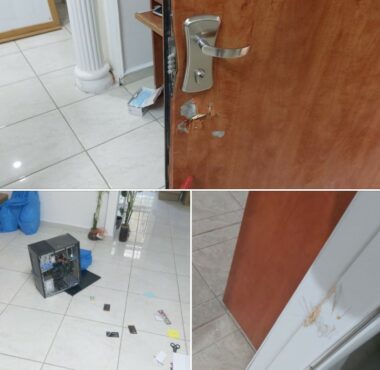 Israeli soldiers invaded, on Thursday at dawn, the headquarters of “Defense For Children International – Palestine Branch (DCI-Palestine) in Sateh Marhaba neighborhood in the al-Biereh city near Ramallah, in central West Bank.

DCI issued a statement revealing that the soldiers violently searched its offices and confiscated computers after breaking into its headquarters in Ramallah.

It added that these attacks will not deter it from performing its duties in protecting the rights of the Palestinian children, and added that it will continue its international pressure to hold Israel accountable for its crimes, including the killing of Mohammad Moayyad al-Allami, 11, who was shot by Israel soldiers on June 28th, in Beit Ummar town, north of the southern West Bank city of Hebron.

It is worth mentioning that DCI-Palestine has been subject to ongoing defamation and incitement campaigns by various organizations that support Israel’s illegal occupation of Palestine, aiming at cutting its funding and shutting it down.

Also on Thursday at dawn, the soldiers invaded Bisan Center for Research & Development in Ramallah and searched it before confiscating computers, in addition to shutting it down for six months.