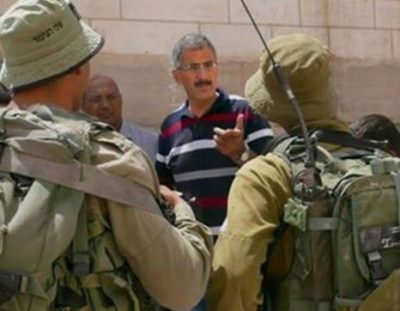 Dozens of Israeli military vehicles and jeeps invaded, on Thursday, Hebron city and several nearby areas and towns, searched many homes and installed roadblocks.

Owners of some of the invaded homes have been identified as Yousef Abu Daoud, Hamza Abu Daoud, Roshdi Qneibi, Ali Olama’, in addition to al-Qasrawi and Edrees families.

In Beit Awwa town, west of Hebron, the soldiers invaded one home, belonging to Shehda Masalma.

In addition, the soldiers installed roadblocks leading to the towns of Ethna, Bani Neim and Beit Ummar, before stopping and searching dozens of cars while inspecting the ID cards of the passengers, and interrogated many of them.

On Thursday morning, the soldiers installed several surveillance cameras on the western entrance of Teqoua’ town, east of the West Bank city of Bethlehem.

Also Thursday morning, the soldiers opened fire on several Palestinian farmers, working on their own lands, east of Deir al-Balah, in central Gaza.

On Thursday at dawn, Israeli soldiers and uncover officers invaded the town of Silwad, east of the central West Bank city of Ramallah, searched many homes and cars, and kidnapped a father and his son, who are also former political prisoners.