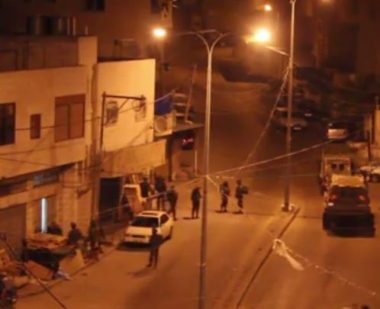 Dozens of Israeli soldiers invaded, earlier on Monday, a few Palestinian towns in the southern West Bank governorate of Hebron, installed roadblocks and searched many cars while interrogated several Palestinians.

Mohammad Awad, a media activist in Beit Ummar, said the soldiers invaded the town at dawn, broke into the home of Ibrahim Ali Ekhlayyel, and interrogated him along with his family.

The soldiers also invaded many neighborhoods in Hebron city, especially Jouret Bahlas area at the northern entrance of the city, in addition to Sa’ir and Halhoul towns, before stopping and searching dozens of cars, and interrogated many Palestinians while inspecting their ID cards.