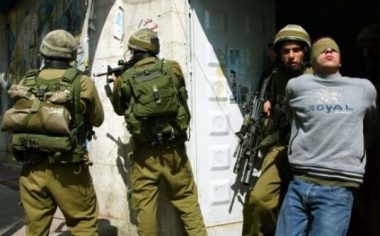 Israeli soldiers abducted, overnight and at dawn Monday, seventeen Palestinians, including children, from their homes in different parts of the occupied West Bank.

Morad Eshteiwy, the media spokesperson of the Popular Committee in Kufur Qaddoum, northeast of the northern West Bank city of Qalqilia, said the soldiers invaded the town, stormed and ransacked homes and abducted five Palestinians.

Eshteiwy added that the abducted Palestinians have been identified as Aws Abdul-Razeq, 26, Aref Marwan, 19, Amer Taha, 16, Sobhi Mansour, 16, and his brother Salah, 15. The soldiers also interrogated many Palestinians while inspecting their ID cards, and violently searching their homes.

Furthermore, Eshteiwy said that the invasion and abductions came while the Palestinians are planning for a central procession, this Friday, marking the sixth anniversary of ongoing g popular struggle against the Israeli Annexation Wall and Colonies, built on privately-owned lands.

In Jenin, in the northern part of the West Bank, the soldiers invaded many homes in Barta’a town, and abducted one Palestinian, identified as Omar Abdullah Kabaha, 23.

The soldiers also installed a roadblock at the main road leading to Arraba town, near Jenin, searched many cars while interrogating many Palestinians and inspecting their ID cards,  and abducted Qais Kamal ‘Areeda, 23, and Fuad Shareeda al-Aqhash, 31.

In addition, the soldiers installed many roadblocks around villages and towns, in various parts of Jenin governorate, before stopping and searching dozens of cars, and examined the ID cards of many Palestinians, while interrogating them.

The soldiers also invaded Be’er al-Basha village, south of Jenin, and broke into Bilal Bin Rabah local mosque, before violently searching it, and occupied its rooftop, before eventually withdrawing from the area, and installed a roadblock in the center of the town.

The Israeli army said its soldiers arrested two Palestinians in Husan town, west of Bethlehem, Ras al-Ein in Nablus, and one in Aboud village, near Ramallah.

On Monday at dawn, the soldiers invaded Palestinian towns in the southern West Bank governorate of Hebron, installed roadblocks and searched many cars while interrogated several Palestinians.