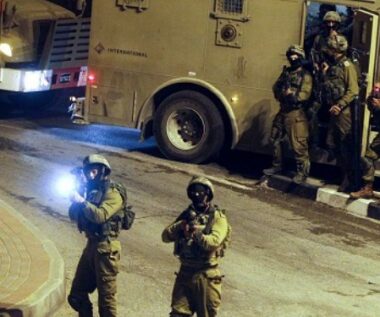 On Wednesday dawn, Israeli soldiers invaded several villages and towns and installed roadblocks, in addition to confiscating surveillance recordings and equipment, near Jenin, in the northern part of the occupied West Bank.

The sources added that the soldiers stormed and ransacked many homes and shops, causing damage, and confiscated surveillance recordings and equipment.

The soldiers also conducted massive searches on lands and hills surrounding the invaded communities and installed many military roadblocks.

The army stopped, searched dozens of Palestinian vehicles, and interrogated many residents while inspecting their ID cards.

Also Tuesday, Israeli soldiers fired a barrage of gas bombs and concussion grenades at a Palestinian home in the Masafer Yatta area, south of Hebron, in the southern part of the occupied West Bank, wounding an entire family, including children.