Army Kidnaps Five Palestinians After Attacking Them In Jerusalem 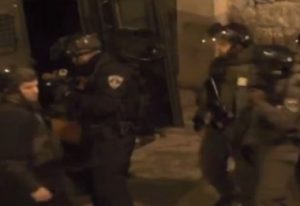 Israeli soldiers kidnapped, on Saturday at dawn, five young Palestinian men, after attacking them near one of the gates of the Al-Aqsa Mosque, in occupied Jerusalem, and injured several others in a nearby area.

Silwanic added that the soldiers assaulted the kidnapped Palestinians with clubs and batons, in addition to spraying their faces with pepper-spray.

They were standing near one of the gates of the Al-Aqsa Mosque, before dawn prayers, when the soldiers assaulted them.

Some of the wounded Palestinians have been identified as Hatem al-Mhalwes, ‘Aahed al-Rishiq, Ramadan Seder, Arafat Seder and Tha’er Seder; they were moved to the al-Makassed hospital for treatment.